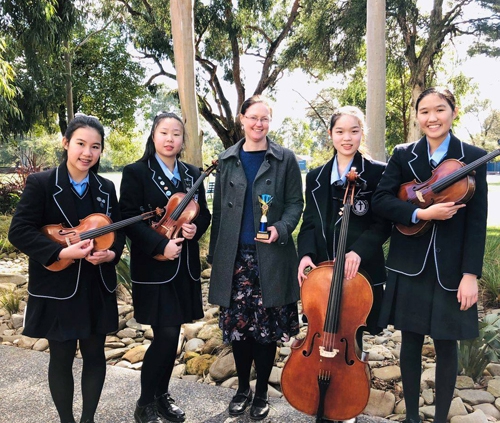 Last Thursday the Year 7 students hosted 11 students from the Melbourne Indigenous Transition School (MITS). Our student hosts welcomed the girls during lunchtime, showed them around the Senior School, introduced the girls to their Tutor group and during period 6 the girls joined our students in an Art, Science or Drama class.

MITS is residential transition school in Melbourne, Australia, for Indigenous students from remote and regional communities. MITS was developed to support indigenous students to further their education as successfully as possible. Each year, 11 indigenous girls of Year 7 age come to Melbourne and live in the MITS boarding house in Richmond. They attend school there for a year before moving into scholarship positions at Melbourne Partner schools where they continue their education.

CGGS was pleased to be able to host the 11 girls from MITS and I thank the students and staff who acted as ambassadors on the day.

We are delighted to share the news that Megan Kuo, Nicole Chang, Sarah Hui and Chloe Law (otherwise known as ‘Quartet Con Brio’) competed in the Monash Youth Music Festival in the Junior Instrumental Ensemble Section and won first place!

They had been working hard with their ensemble director Margaret Butcher to prepare for this competition and she was pleased that they performed with “nice detail and inspiring togetherness”.

Below is a reflection of their experience:

On 17 August, our quartet gathered at Huntingtower School to perform in the Monash Youth Music Festival. We were nervous, but excited to present what we had been working on for many months. Our preparation for the event included early morning and holiday rehearsals, as well as a workshop with eminent violinist Anne Harvey-Nagl.

On stage, we felt a bit shaky however, we settled into the performance as it went on. It was somewhat surreal when it was announced that we had won. We were thrilled, and felt so grateful we had been able to take part in such a fantastic opportunity. This experience had allowed us to bond and refine our unity while playing, something the adjudicator commented on as a contributing factor to our win.

The support and encouragement from our families and teachers at school was paramount to our success. We would especially like to thank our quartet teacher, Ms Butcher, whose patience and dedication has been remarkable. Our quartet has improved so much under her guidance, and it would not have been possible for us to achieve this much without her help.

This year at the lunch the Vice Chancellor of Swinburne University, Professor Linda Kristjanson AO spoke. Professor Kristjanson AO also spoke at one of our own Parent Education Seminars on Educating Future Ready Learners in Today’s Changing World in 2018 and also addressed our students in an assembly in August 2013 was the guest speaker.

As a passionate STEM advocate and in the lead up to National Science Week, she spoke about the ways in which the Invergowrie Foundation and their partnerships with Universities throughout Victoria are working together to promote Science studies amongst our girls.

Professor Kristjanson’s commitment to STEM is evident in the Swinburne University vision which is to be a world-class university creating social and economic impact through science, technology and innovation.

Professor Kristjanson stated that Science, Technology, Engineering and Mathematics are areas that are critical to all careers in this century yet the numbers of student graduating from these disciplines have declined dramatically.

The findings from a recent report, “Girls’ Future – Our Future” which was funded by the Invergowrie Foundation and completed by researchers at the University of Melbourne and Deakin University, stated that “If girls and women are not encouraged to engage with STEM they will be at greater risk of becoming excluded from a substantial part of the workforce of the future”.

Acting Head of Science, Mr Anthony Pasinati, commenced our Senior School Assembly and National Science Week with a bang, 3 hydrogen bombs to be precise. This certainly grabbed the attention of us all, as did his astronaut clothing bought especially for the week.

On Thursday August 15, the Year 8 students visited the Docklands as part of a science excursion investigating sustainable buildings. Although it was cold and windy along the port, we all thoroughly enjoyed our time walking around the Docklands.

When we first arrived at our base for the day, we spoke with Senior Lecturer in Water Resources Engineering, Dr Scott Rayburg, from Swinburne University about how Thermal Cameras, (cameras which show with colour whether the surface temperature is warm or cool) can help us in identifying where the heat in a building is going when the heating /cooling is on. We then had an opportunity to use these thermal cameras to identify how much heat is in the objects around us.

For the next phase of the excursion, we split off into two groups where we visited the ANZ (commercial) and EXO (residential) buildings. We identified how some features on these buildings (for example, recycled water filters on the ANZ building and a white panel with cheese shaped holes over the EXO building) have been beneficial to the buildings’ energy efficiency and sustainability goals to protect our natural environment. We also visited the Docklands Library and learn how solar panels, cross-laminated and recycled timber, doubled glazed windows and passive ventilation in the building help to make the library as close to Carbon-neutral and free of wasted energy as possible.

The excursion was an experience that made us all think more seriously about how the buildings that we work, live and study in can make a huge impact on the environment.

On August 7th, Year 8 students travelled by bus to Elwood to study urbanisation and urbanisation threats. We also looked at how the suburb prepares for floods, the future threats of sea level rise, and the challenges associated with increasing population density. When we arrived at Elwood we studied the liveability of the area and assessed the flooding risks along the Elwood Canal. Elwood used to be a swamp and they drained the swamp by building the canal that lead from Elsternwick Park to Port Phillip Bay. We walked along the canal to the beach and looked at some of the drains that assisted with redirecting water, so the houses located nearby wouldn’t be affected. We also looked at things Elwood had put in place to prevent flooding, things like drains, elevated houses and cambered roads. Our highlight of the day was when we went down to Elwood beach, the weather was cold and cloudy, but that didn’t stop us from having fun! We walked up to Point Ormond where we were lucky enough to see these amazing views of the Melbourne CBD. Overall this an amazing opportunity, and we all learnt lots about how places have had to adapted overtime and how important urban planning is.

Highlights from last Saturday include, Year 7 Pearl won the second half of the game against the top team, and unfortunately, it was not enough to win the game.

Year 7 Silver out played MLC Pearls and defeated them 10-7.

Year 9 Gold had an 8 goal win over Fintona Femmes, and Year 9 Diamonds had a convincing win over Strathy Sunset.

Year 9 Aquamarines had a very close game against Koonung Phoenix, but CGGS were steady and more consistent, defeating them 14-12.

Year 12 Moonstones were too strong for Strathy Shooting Stars, and are looking tough for finals.

Congratulations goes to all CGGS Netball teams on their efforts throughout the Winter Season and best of luck to teams competing in the semi-finals.

Harry Potter and The Order Of The Phoenix In Concert!

On Thursday 15 August the Year 8/9 Music Performance Elective attended the Melbourne Symphony Orchestra performance of ‘Harry Potter And The Order Of The Phoenix In Concert’ at Hamer Hall. This MSO experience was a viewing of the movie whilst listening to a live performance of the music soundtrack. The venue, decorated throughout with Hogwarts House banners, was buzzing with many audience members dressed up in the costume of their favourite character or the scarf of a particular House.

The students had previously studied components of the musical score and were thrilled to be immersed in a live performance of the music alongside the screening of the movie. The immediately recognisable iconic music themes were creatively infused into the orchestral treatment of new thematic ideas.

Jenelle – “The experience and environment was so knew to me, so just being there was amazing. The engagement between the audience and the performance was really interesting, along with the ability to watch each instrument contribute to the overall score.”

Stephanie – “I found the concert wonderful as you could see the orchestra live, which made the music much clearer and easier to listen to. It was also interesting to see how the soundtrack fitted with the movie.”

Bethany – “I found the Harry Potter and the Order of the Phoenix live performance to be awe-inspiring. I felt like I was listening to the recorded soundtrack of the film most of the time, because the orchestra was so in time and sounded wonderful.”

Phoebe – “Watching Harry Potter and the Order of the Phoenix in concert was such an enjoyable experience. The atmosphere was amazing and I loved being able to interact with the movie and the live orchestra.”

On Saturday August 17, I had the honour of participating in the AGTV German Poetry Competition State Finals at the Austrian Club following my result at the regional competition.

It was a lovely afternoon which included a taste into some German food and culture, as well as having an opportunity to quiz your knowledge on the German culture.

All 21+ Poetry performances for Year 8 Daf(school level) were of an impeccably high level and took some time to perfect. Unfortunately, I did not receive a prize, but I was extremely happy with my achievements and had a wonderful afternoon. I would highly recommend that anyone studying German at CGGS participates in the German Poetry Competition.

Have a lovely weekend.