On Wednesday our VCE students completed the last of their examinations. Well done to the Class of 2016 for the great composure and diligence shown throughout the the examination period. On behalf of the students I would like to take this opportunity to thank our VCE Coordinator, Mr Mark Corrie and Year 12 Coordinator, Mrs Karen Anderson plus the team of invigilators on their excellent organisation and management of this process. We look forward to celebrating the achievements of the cohort and all the students in Year 11 who have also completed a Unit 3/4 subject this year when results are made available to the students.

Of course the moment the VCE examinations concluded our Year 10 and 11 examinations commenced and these will be followed by the compulsory VCE HeadStart Program for all Year 11 and 12 students from Thursday 24 November through to their final day on Friday 2 December.

Our younger Senior School students in Years 7 – 9 do not complete formal examinations however, in class tests will take place over the next few weeks prior to their final day and Presentation Night for 2016 on Tuesday 6 December.

Senior School Assembly
Last week our Senior School Assembly was again a highlight of the week. Veda Surapaneni presented on her exchange to Oxford and encouraged younger students to research the opportunities in areas of interest through “Oxbridge”, Meg Billson, Alanna Chew-Lee and Serena Chan reflected on their time in at Shanghai No. 3 School.

As Remembrance Day fell on Friday and our assembly is Tuesday we were also fortunate to hear from both Mrs Lemanis and Molly Ewens about the significance of the day. Mrs Lemanis accompanied The Spirit of Anzac prize winners to Gallipoli last year and this year, Molly Ewens (Year 10) was one of the recipients of the Spirit of Anzac Prize and she travelled to Gallipoli and other parts of Europe in April. Molly was certainly able to bring her experience to life in her speech to us all about the meaning of “Lest we Forget”, the poppy and the heartbreak faced by all the service men and women and their families on either side of all the battles that have been fought through history since World War I. Thank you to both Mrs Lemanis and Molly for this most moving tribute.

Year 7 Orientation Day for the Class of 2022
Last Friday we welcomed 96 students and their parents to our Year 7 Orientation Day for girls starting in Year 7 2017 – our Class of 2022. This was a wonderful day for all the students and the excitement and energy was evident. We began with Mrs Dunwoody being introduced to the audience by Nao the robot who had been programmed by current Year 6 student Juliana Chandrasekara. Ms Liza Stevens, who will be the Year Level Coordinator for the Year 7s in 2017, spoke about her plans for the year ahead and introduced the Form teachers Mrs Jenine Caruso 7B, Mrs Meg Anderson 7P, Mrs Jennie Goad 7W and Ms Liesa Winkler 7T. The students spent part of their time in their new Form groups and Houses with the leaders and older girls and they also participated in Zumba and some interactive and initiative games, as well as getting to know you activities. Meanwhile the parents heard important messages on Transition from School Counsellor, Mrs Paula Kolivas and also curriculum information from Mr Ben Jenkinson, Director of Teaching and Learning and how to use SEQTA from Mr Kim Perkins, Head of Digital Learning. All in all, it was a most successful day and I would like to thank and acknowledge all the various teaching and professional services staff who assisted me in the planning and organisation of this part of the transition to Senior School.

World of Work Day
The Year 9s took part in a World of Work Day on Wednesday 16 November. Past students Maddie Tse and Lauren Chui, started the day as guest speakers at a Mentor Breakfast. Their advice for the girls was invaluable and I encourage all parents to ask their daughter for three messages they took away from this session.

Duke of Edinburgh
The Award program was first introduced in the United Kingdom in 1956 as The Duke of Edinburgh’s Award. The aim was to motivate teenagers to become involved in a balanced program of voluntary self-development activities to take them through the potentially difficult period between adolescence and adulthood.

Today the basic principles of The Award remain the same, but the activities and delivery continue to evolve and adapt to suit the changing demands of modern society and the varying needs of young people. The Award is now a major international program, with over 120 countries participating and used by organisations working with young people throughout the world.

Camberwell Girls Grammar School Students continue to participate in The Award with great success at all levels.

We congratulate the following girls upon recently receiving their award. The Award is recognition for all their hard work, dedication and service to their endeavours and their community:

The exhibition presents outstanding work by students who have completed Art or Studio Arts studies in the VCE and provides insight into young people’s ideas, thinking and creative practices.

Students who wish to be considered for inclusion in the Top Arts exhibition must submit photographs of their work for consideration by the NGV Panel. It is with great pleasure that we share the news that Amelia Noffs (Year 11) has had her VCE 3/4 artwork shortlisted for Top Arts. Of approximately 2,000 applicants statewide, 150 students’ works are shortlisted.

From this shortlist, the works of the top 50 students in the state will be displayed as part of The Top Arts 2017 exhibition. The official launch will be on Thursday 23 March at The Ian Potter Centre: NGV Australia, Federation Square, Melbourne and it will run until Sunday 16 July 2017.

Being shortlisted for inclusion is a great honour and we congratulate Amelia and wish her luck for the next round. We have included images of Amelia’s work which are coloured pencil on paper.

Business Chicks Breakfast
Sophia Amoruso is not your ordinary businesswoman. Having started an online store on eBay selling vintage clothing when she was just 22, Amoruso founded and steered her first business, Nasty Gal Vintage, quite literally from rags to riches. Based on the success of Nasty Gal Vintage, Amoruso founded Nasty Gal, a women’s fashion retailer, which, in 2012 was named by Inc Magazine as one of the world’s fastest growing companies. She has since written the best selling book #GIRLBOSS and in 2016 was named by Forbes magazine as one of the richest self-made women in the world. All that and she’s very understated.

Last Thursday two of our Year 10 Business Studies students, Molly Ewens and Alanna Chew-Lee, along with Mrs Larkey, were lucky enough to be hosted by Bond University at a business breakfast at which Sophia spoke.

Among other things, Sophia spoke of dreaming big but being prepared to take little steps to achieve the dream, the importance of doing jobs you don’t necessarily like along the way but that build up the experience you need to genuinely move forward, and of the importance of connecting with customers in meaningful ways in order to build trust and loyalty.

Sophia didn’t know what she wanted to do when she left school, she didn’t go to University and she’s the first to admit she could never have predicted the success she’s achieved as a business woman. Just goes to show how different those post-secondary pathways can be.

2040
Congratulations to Janice Soo who has been selected to participate in the National Schools Constitutional Convention, to be held at Parliament House in Canberra. Janice, who is our School Debating Captain for 2017, is already brimming with ideas to extend Debating in the future and it is not surprising that she is one of only 25 students selected from Victoria and 100 students selected Australia wide to take part in the Convention. The competition covers all her expenses and the event will take place 15-17 March 2017.

7 Healesville & Coranderrk excursion
On Tuesday 15 November, the Year 7s visited Healesville Sanctuary. We drove for an hour and stepped off the bus taking in a deep breath of fresh country air, ready for our day at this beautiful and peaceful sanctuary. We began the day with a quick introduction from Murrindindi, who told us about the history of the land and how it came to be, followed by a hike up to the area where we participated in an interactive seminar on endangered Australian animals and what Healesville Sanctuary does to protect them. After the seminar, we were encouraged to explore the vast area of the sanctuary and what it had to offer; the experience was both eye opening and enlightening.

Throughout the recreational time a few Year 7s were fortunate enough to get up close and personal with the animals. A personal favourite of mine was the wallaby exhibit, where we were able to pat and interact with the young wallabies. We then visited the Birds of Prey show as a year level, a live showcase of some of the most majestic, interesting (and in some cases, terrifying) birds of prey native to Australia. There were moments where the birds would swoop right over your head or showcase its wingspan for the audience of many students, which only made for an extremely unforgettable show. After the show and lunch break, we split into our groups. My group was lucky enough to be able to finish off the day with a bush walk and talk led by Murrindindi. He taught us about his people and some of the most amazing, courageous and brave things they achieved. He talked about the land and its lush forestation and greenery and what indigenous people had cleverly used as everyday necessities like tissues and toilet paper, as well as some of the sacred areas to the indigenous people located around Healesville itself.

To finish a long yet exciting day in Healesville, we said our final goodbyes and set off back to the city. The day will forever be one of the most joyous experiences of our schooling, and we are all in high hopes that we can visit Healesville Sanctuary again soon! ~ Sabrina Renzi 7P

I hope you have a great weekend and I look forward to seeing all our Camberwell Girls families at CamART next week. 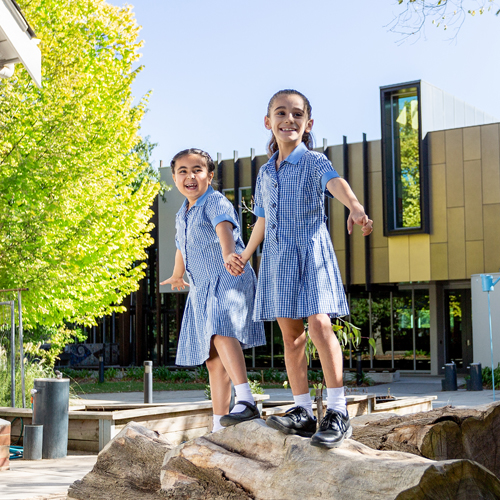 Today Mrs Dunwoody talks about being our best selves by bringing balance to our lives, and Ms Woolcock has written an article on the importance of play. 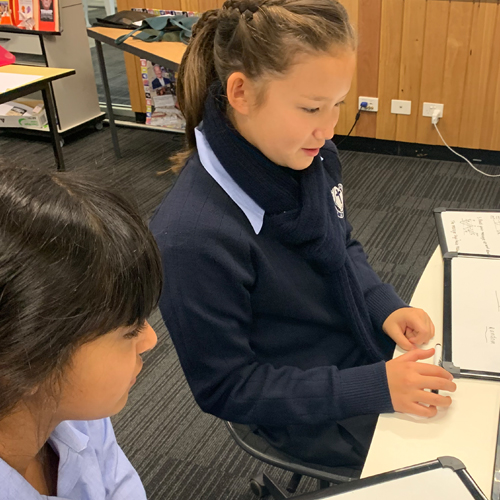 A brief period in remote learning has not stopped the Senior School teaching staff creating fantastic learning experiences for our students. Plus some pre-remote learning reflections. 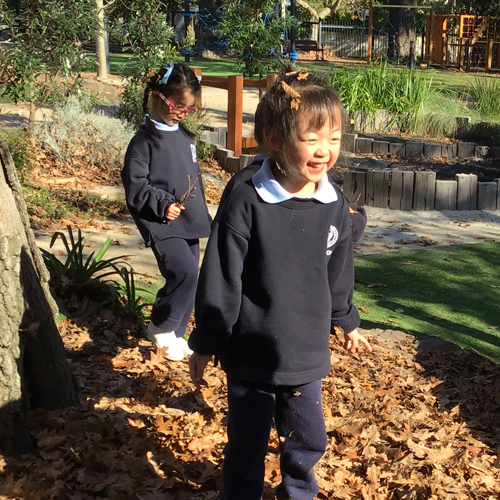 The ELC students have spent some time in nature this past fortnight & some fantastic learning experiences have come out of remote learning. 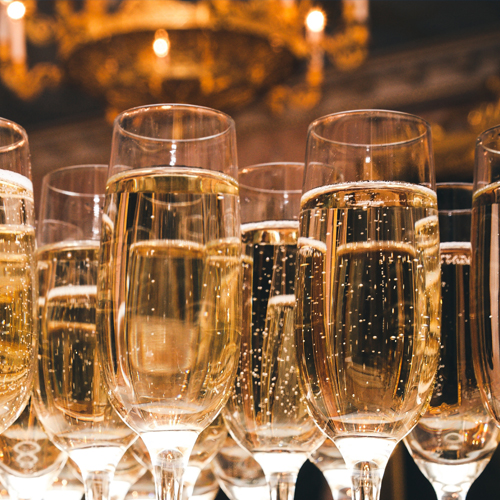 The school is so thrilled to invite the CGGS community to the event of Century! The Centenary Gala!

Christmas is for Adults too
Scroll to top
X