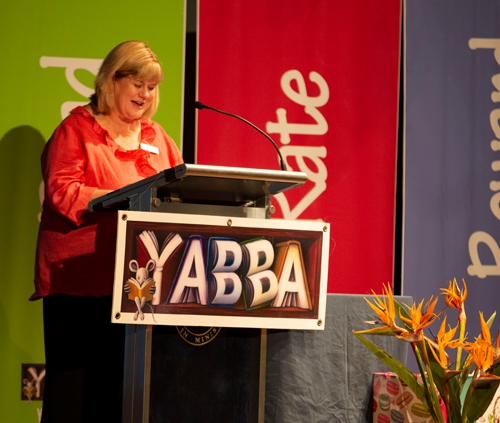 In recent weeks we have hosted two amazing events at our school that were greatly influenced by some of our former students.

In our Shaping the Future event at 6.30pm on Wednesday 23 October 2019, the audience of students, staff, parents, old grammarians and members of the wider community were invited into a discussion with four members of The Outer Sanctum, an all-female group of women who host a weekly football podcast. The group included two old grammarians, Emma Race (1993) a broadcaster and writer and Lucy Race (1987) trainer at the SPJ Football club and business owner, along with fellow podcast members author Nicole Hayes and lawyer and academic Kate Seear.

Throughout the lively and engaging discussion, members of The Outer Sanctum discussed important conversation topics including the voices of women in the AFL, sports journalism and the power of a community of women. We have been so fortunate to have re-connected with Emma and Lucy this year. After seeing our social media posts of our GSV Football team, they came to watch our girls play a game and also joined us for our special presentation of the Reconciliation jumpers and netball bibs during National Reconciliation Week. What an incredible example of our former students supporting their school.

On Tuesday this week we hosted the annual Young Australian Best Book Awards Ceremony (YABBA)at CGGS. Former student and children’s fiction writer Alex Miles (2001) was instrumental in assisting us to be chosen as the hosting school this year. Alex is the author of the Olive Black and Geek Girls Series and has launched one of her books at the school in recent years. We feel very privileged to continue our connection with her.

We welcomed 33 authors and illustrators including Andy Lee (Alex’s brother), Sally Rippin and Terry Denton, along with over 400 students from a range of primary and secondary schools to our school. In addition to the formalities of the ceremony, students were able to meet the authors and speak with them about their books. Isabel Sootoh from Year 6 also received a special award for her invitation illustration.

Throughout the course of the year, Mrs Anne Devenish our Head of Library Information Services has worked tirelessly with the YABBA committee to organise the ceremony. Anne’s enthusiasm and her expertise in children’s literature and in organising large scale community events was invaluable. The President of YABBA, Mr David Linke spoke to me on a number of occasions throughout the day to re-iterate his thanks for all of Anne’s work.

Our Ormiston librarian, Ms Kim Yeomans has also written about the ceremony and the involvement of our CGGS and I share it with you below.

Barbara Sutton Hall was buzzing with bookish excitement on Tuesday when CGGS hosted the highly anticipated YABBA Awards Ceremony. It was a fabulous celebration of books and reading and an opportunity to acknowledge some of our favourite Australian children’s book creators.

The Year 5 and 6 VIPs warmly greeted and escorted the YABBA shortlisted authors who were welcomed like rock stars by 500 excited students as they entered the hall. The Vocal Express choir set the tone for a fun morning with their performance of  ‘A Spoonful of Sugar’. There were lots of laughs at the Opening Ceremony at Adam Wallace and James Hart’s crazy attempts to cut the red ribbon. During ‘Squiggle-ology’, talented illustrators, James Hart, Marjory Gardener, Heath McKenzie and the legendary Terry Denton each turned a student’s squiggle into a picture as we watched in amazement. Heath even managed to create a self-portrait from a dot and a squiggle! Budding authors listened carefully as Andy Lee, Sally Rippin, Jacqueline Harvey, Felice Arena and Tim Harris answered ‘Burning Questions’ about their writing. We were very proud of Isabel Sootoh when she was acknowledged for her winning YABBA illustration. Then author, Gabrielle Wang was awarded the Graham Davey Citation for her impact on Australian Children’s Literature and reminded us “Books open our eyes so our imaginations can fly.”

Cheers erupted as the winning books were announced and there was great excitement as the ever-popular Aaron Blabey and Andy Griffiths appeared via video on the big screen. Congratulations to all of the shortlisted and winning authors and illustrators. These are the winners of the 2019 YABBA Awards:

Seriously, Do Not Open This Book by Andy Lee and Heath McKenzie

The 104-Storey Treehouse by Andy Griffiths and Terry Denton

After the formal ceremony, the CGGS gymnasium was filled with readers eager to meet some of their favourite Australian literary idols and have their books signed. Those students who patiently waited in never ending lines to meet Terry Denton and Andy Lee demonstrated true commitment!

Thank you to the book creators who gave their time to attend and to the YABBA committee and our Head of Library, Mrs Devenish for an unforgettable YABBA Awards.

‘The greatest gift is a passion for reading’. (Elizabeth Hardwick)