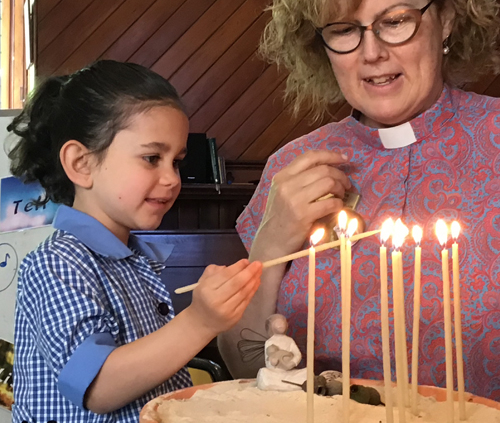 During the week, our Ormiston staff and students had the opportunity to experience being in their 2021 classes on Tuesday morning before recess. It was wonderful to see so many smiles and happy faces during our orientation morning for our Junior School students. New families to Ormiston next year are currently not allowed to attend onsite, but our 2021 class teachers conducted video conferences on Zoom with new students.

Additionally, we conducted two video conferences with new parents to Ormiston next year. Parents received information about the Junior School on Zoom, and they received the Orientation Guide booklet and a video to gain a better understanding of the day-to-day routines. We look forward to meeting all 29 new families next year.

The students and teachers all had a incredible evening together!

“My favourite part of extended day was the movie. It was so cool to see some of the things in the future”– Angela

“My favourite part of extended day was dancing Zumba”– Serena

Cultivating connections between students, both those continuing from Ormiston, and those joining CGGS from local primary schools, is a key purpose of the Year 7 Orientation Day, and with the recent easing of restrictions, we were thrilled to be able to conduct aspects of the program on-site. The focus for us this year was to provide opportunities for students to connect with other students, Year 7 Coordinator Ms Tuba Ozak and their Form/Tutor Teacher, as well as familiarising themselves with the CGGS Senior School campus.

Prior to arriving for their designated session at CGGS, students and families were provided with a pre-recorded welcome video that introduced the Principal, Mrs Dunwoody, Deputy Principal/Head of Senior School Mrs Cathy Poyser and the wonderful Year 7 team including all 8 tutor teachers and Ms Ozak. Furthermore, a number of existing students presented reflections from their time at CGGS including current Year 7 student Sabrina Bignold, our School House Captain Chloe Langley and School Captain Sophia Giagoudakis.

On the Friday morning we welcomed students to meet their fellow peers and Tutor Teachers, taking part in activities such as a Q and A session, a tour of their new school and perhaps the most exciting aspect, playing with their new lock! The tour was led by our amazing Tutor Teachers, stopping at all of our must-see sights, including the Science Labs, Library and Fig Tree Cafe!

The day also provided the Year 7 teaching team with an opportunity to find out what the new Year 7s were looking forward to—such as borrowing unlimited books from the Library, participating in House events and taking part in the many wonderful co-curricular opportunities on offer. It was delightful spending time with our new CGGS students and chatting with their families at the gate, who were eagerly awaiting to find out how their daughter’s orientation day went!

A big thank you to our Year 7 Tutor Teachers who were invaluable in making this day a success, welcoming the students to our CGGS community with open arms and big smiles. Indeed, our Tutor Teachers will play a major role in helping our students transition positively next year.

We are looking forward to next year and cannot wait to start the journey together in 2021.

As researchers, the Early Learning 4 (Full Time) children have used tools such as the iPad and Prowise to view clips and photographs and non-fiction texts such as National Geographic magazines, to learn about how our actions and the actions of people in our community, can be helpful or harmful to creatures that live in the ocean, in particular, sea turtles. Throughout this term, the children demonstrated their curiosity, as they investigated why plastic bags can be found in the ocean and why sea turtles are attracted to eat plastic bags. They documented their discoveries through the languages of dialogue, clay, charcoal and paint.

As active citizens and collaborators, the children are currently creating messages to inform our individual families and local community, about the importance of using reusable bags. As designers, the children are currently inquiring into different types of slogans and graphic representations they can use to create their own message on a reusable calico bag, which they will be able to use with their families.

Throughout this term, the children demonstrated their ability to be curious, confident and involved learners as they developed their inquiry, research and investigation skills. They also developed an appreciation of sea turtles and how they can, through their actions, help to inform our community of ways to keep our oceans clean and our sea turtles safe and healthy.

“There are some plastic bags in the water and sea turtles might think they’re a jellyfish. Also, there’s lots and lots and lots of rubbish.” – Ting Xuan

“If the bags are falling in the ocean then the turtles might die because they might eat the bags. We can throw the bags into the bin.” – Rubyrose

“We need to recycle plastic bags. There are loads of plastic bags and sea turtles might get trapped. We can use bags made from fabric not plastic.” – Alex:

“It’s full of rubbish. The sea turtles might choke on the rubbish and die.” – June

“This is rubbish and it’s making the sea look ugly.” – Calista

The EL4 Part-time class celebrated NAIDOC week by reading and viewing Aboriginal picture books and learning more about Australia’s First People. Some of the children were inspired by the illustrations in the picture books that we read and created their own artworks using a similar style of painting. We explored symbols that Aboriginal people use to tell stories and made up our own story using symbols. Lilian showed the children some ochre (a soft rock) and explained that before there were pencils, paints and pens that the Aboriginal people would have used ochre as a paint by crushing it and mixing it with water. The children helped grind the ochre and we added water to it to make a paint. Lilian painted some symbols on the children’s arms and then the children experimented with painting using ochre.

This week, we had a Zoom meeting with Murrundindi and the children shared some of their learning with him. Murrundindi taught the children more about Aboriginal symbols and led the children in a drawing session where they practiced drawing symbols. Murrundindi used symbols to tell the children a story about an emu being tracked by a man at night. Through our classroom discussions and by engaging in cultural experiences, the children are becoming culturally aware. They learn the history of Australia and about the traditional custodians of the land they live on. They learn about diversity and acceptance of others.

Early Learning 3 a community of learners

Early Learning 3 children are immersed in ongoing learning in a meaningful way. They are very productive in building on prior learning experiences and extending on their own interests in relation to many classroom topics. The connections that children continue to make are related to plants, birds and animals.

Recently, we examined leaves and trees and took the opportunity to learn about what plants need to grow. Children did observational drawings and here are some of the children’s comments:

“Leaves, they are natural.  They have lines and there are lots of different leaves.  When the wind blows them, they wave!  There are round leaves and heart-shaped leaves and oval leaves”– Iris

“Leaves have veins!”  They are important to flowers.  When the rain goes on the leaves, they start to drink and it goes down to the roots”– Melanie

Our topic on bears continues throughout the term and as a class, we chatted about the three bears eating their bowls of porridge. We examined oats being the main ingredient in porridge. The children had discussions about seeds and grains to understand how oats are prepared for us to eat. We cooked our porridge to have with the three bears and we were also joined by Mr D and Mrs Spencer who also tasted the yummy porridge.

As we get closer to celebrating Christmas, we discussed the virtues of caring, sharing and loving with the help of Reverend Creed who narrated the story of Christmas. The children appreciated Reverend Creed’s visit to the class and the visit to the Chapel. We talked about learning to give to others and receiving gratitude.

“I am thankful I have Eva as my friend!” as she lit her candle in the chapel.” – Evelyn P:

The EL3 children are becoming a strong community of learners, confident and competent in knowing their strengths and skills as well as their identity and belonging.

Netball has finally returned at Ormiston! The Year 2 to 6 students are very excited to be able to enjoy the sport they love so much and share with their many team mates.

The Ormiston Netballers have recently been training at lunchtimes and are thrilled to be back on the court. Next week they will play matches against each other. The students will be ready to re-join the Boroondara Netball Competitions in 2021. The photo below is of our Year 2 students after a hot training session.

Netball has finally returned at Ormiston! The Year 2 to 6 students are very excited to be able to enjoy the sport they love so much and share with their many team mates.

The Ormiston Netballers have recently been training at lunchtimes and are thrilled to be back on the court. Next week they will play matches against each other. The students will be ready to re-join the Boroondara Netball Competitions in 2021. The photo below is of our Year 2 students after a hot training session.

This week we have received some wonderful news in the area of Science. Elise Orme of Year 5, whose Experimental Research project: Does Bokashi juice, Actizyme or water work fastest to relieve a pipe blockage? won a major bursary in the Science Talent Search this year, has been selected as a Primary Finalist in the BHP Foundation Science and Engineering Awards.

Congratulations to Elise for this outstanding achievement!