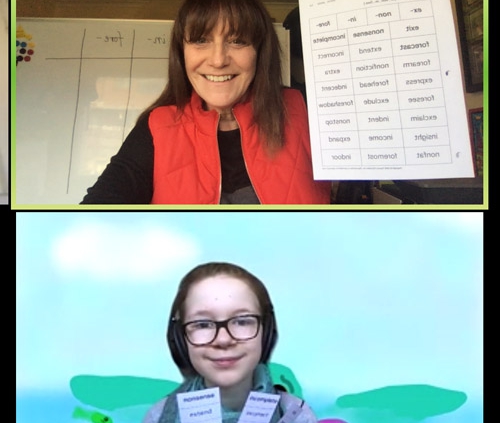 Year 1 students this week have been developing their skill and understanding of estimating and measuring capacity using informal units. The students did an exceptional job predicting and ordering which containers could hold the smallest to largest capacity and they used water and other objects to determine whether their predictions were correct. I was particularly proud of the way they confidently used mathematical terms such as prediction and capacity and how they could clearly explain the steps in the process and the results they found. A number of students explained that although some containers looked tall, others had a large base and this meant the capacity of the container was larger than they initially thought.

Year 4 students and teachers participated in a Zoom session with Murrundindi on Tuesday 4 August. He discussed and showed photos of the ‘producers’ in the ecosystem around the Healesville area. We learned which plants were useful for producing fire and which plants produced coffee like beans, amongst other things. The students were surprised to notice that many of these plants could be found in their local neighbourhoods and were able to make connections to some they even had in their own gardens.

The ability to connect synchronously with the Year 5 students over video has allowed teachers and students to meet each morning as a class to plan and prepare for the day ahead. This has also been a wonderful opportunity for students to individually present a personal choice item to their peers. We have enjoyed completing many Kahoot quizzes, some students have spoken about environmental issues that they are passionate about, while others have shared their favourite holiday destination with accompanying photos. The power of meeting in this way, whilst we are remote learning, has also allowed students to work in small groups to explore new ideas and share their discoveries, or in breakout rooms to negotiate, plan and prepare a group response. Our learning curve has been positive and allowed for tremendous creativity and motivation. It’s been great and reassuring to be able to see each other every day.

Every Wednesday the Year 6 students apply their Mathematics understanding and skills in a focused problem-solving lesson. During these sessions, students explore and practise different strategies for solving complex multi-step problems. They learn how to think flexibly, effectively record their working out and justify their answers. We have been utilising Zoom break-out rooms to enable the students to collaborate and share their strategies and reasoning with each other.

Throughout the year, the students have also been using these problem-solving skills to compete in the highly regarded Maths Olympiad and Maths Games Competition organised by the Australian Problem Solving Mathematical Olympiads. It has been a privilege to witness the students demonstrate the school values of commitment and courage and their confidence grow as they grapple with these complex and challenging questions.

During remote learning, families can explore and participate in fun Maths problem solving challenges at The Victorian Maths Challenge website.

Here is the website link to Victorian Maths Challenge. http://vmc.global2.vic.edu.au/

During this term, Year 2 students have had the opportunity to take part in the remote Art Club which is currently focusing on the Australian artist, Ken Done.

The Art Club is open to all Year 2 students and different tasks are released each Tuesday at 3.00pm via Seesaw. Students have learned about Ken Done and his artworks which depicts Australian landmarks and past times.

The first task was a Mindfulness colouring-in, which Ken Done drew, based upon one of his paintings.

The second task was drawing or painting an Australian landmark.

The third task was designing a t-shirt, inspired by his ‘Classic Sydney’ t-shirt.

More tasks will be released: how to draw koalas, a koala family and colourful fish in the bay.

Students receive written and recorded instructions through Seesaw for activities designed by the teachers at the beginning of each week. They will then use creative tools, such as writing, taking pictures, drawing, recording or creating a video to capture their learning; followed then by the teachers approving the students work.

Year 1 Chinese Heritage – Lin Zhang’s class are learning to talk about “My Body”. Firstly, they looked at the picture and listened to the recording. They listened to it again then pointed at the correct parts of the body in the picture.

Secondly, they practised saying the words by themselves.

Lastly, they used the Template below and numbered the body parts shown in the picture in the order they heard it.

I wish all our Ormiston families a restful weekend.