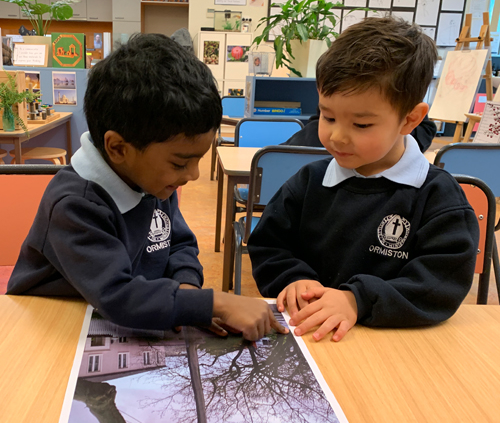 Following the Mid-Term Break last week, we have had all our year levels back at Junior School full-time from Early Learning 3 to Year 6. It has been a pleasure to watch our students learning and connecting together in their classrooms and outside in the playground. From next week, we will begin to introduce our full program of co-curricular activities that will include all music ensembles and different sports.

Unfortunately, we are not able to use non-CGGS sport coaches at this time but we will endeavour to set up all sports by the end of the year.

Our Junior School assembly this week involved handing out our annual Ormiston Spirit Awards. These prestigious awards are not about students being the best, but are presented to students for the following reasons:

Congratulations to the following students:

Congratulations to Annabelle Teh of Year 3, on successfully completing her AMEB Music Theory Grade 2 exam. This is a wonderful achievement by Annabelle.

Iris Lu,  Year 4
Congratulations to Iris Lu who won the Grand Prize – Victorian Children’s Division after competing in the 2021 Pearl River Kayserburg International Youth Piano Competition earlier in the year. This is an annual worldwide competition located in Singapore.

Wishing all our Ormiston families a restful weekend.

Inquiry learning is about building learning capacity and nurturing learners as thinkers, self-managers, collaborators, communicators and researchers. It’s about giving students the skills, the dispositions and the opportunities to investigate – to find out information, make meaning and take action based on what is discovered. – Kath Murdoch 2015

Jackson: An idea – with thinking.

Heidi: Curious means everything about your questions.

Within the program, intentional teaching and provocations are used to develop the children’s curiosity and their sense of wonder and awe. The children are encouraged to develop and document their wonderings through I wonder statements and add these to our ‘Wonder Wall’ in the classroom.

During this term we researched Jackson’s wondering related to powerlines and electricity.

Jackson: I wonder why the electricity moves through the powerlines.

As a curious learner, Jackson noticed the powerlines and poles in the street. Photographs were taken of the powerlines that were outside our school. As researchers, Jackson and Aran intentionally looked at these photographs and noticed that powerlines have ‘wire’ cables and these are connected to each pole, and the cables go from one pole to the next pole and to each house in Oak street.

Ms Angela: I wonder what you notice in these photographs.

Jackson: These are very big poles.

Aran: Lots of lines on the pole.

Aran: The electricity goes in the lights. It’s coming from the pole.

Aran: It’s up in the sky and then the electricity goes into the poles.

Jackson: When there’s a storm, the electricity goes apart, and the lights will turn off. That’s what happened at our house. Then it came back in 3 months.

Ms Angela: I wonder why we need electricity?

Jackson: Otherwise, we’ll get bumped if it’s dark and we can’t see if the lights aren’t on.

As collaborators and researchers, Jackson and Aran used photographs and diagrams to investigate the source of electricity and how it’s produced in Victoria. The recent storms in Melbourne also provided an opportunity for further investigation and research. Through photographs from the local news, Jackson and Aran discovered how strong winds can break branches of trees and how these can fall and damage powerlines. This provided a provocation for further discussion about how damage to powerlines can stop electricity flowing into homes and when this happens, families cannot use many appliances.

As confident and involved learners and inquirers, Jackson, Aran, Travis and Zane used a battery, wire and light bulb to create their own electrical circuit. This provided an opportunity for them to make discoveries about what is required to turn on a light – energy (electricity) inside a battery and a wire path for the electricity to travel along. They also discovered that if it’s not a complete circuit, then the electricity stops moving through the wires and the bulb will not light up. They made connections between an incomplete circuit and damage to powerlines during a storm.

Jackson: I was clipping it to the battery. The battery was making the energy. The globe didn’t work because it wasn’t clipped on. I clipped it in and the globe lighted.

As a researcher and keen observer, Aran made an interesting observation and discovery. He observed, that when he touched the metal part of the battery holder with the peg from the wire, the bulb lit up. Aran put the metal peg on and then took it off and Zane, Jackson and Travis also noticed that the light bulb went on and off. It worked like a switch.

Zane: We had to let the electricity come through and go around and around and then the light bulb worked and it glowed.

As communicators, Jackson, Zane, Aran and Travis documented their observations of the electrical circuit through drawing and dialogue.

In our curriculum, we embed a culture of curiosity. Throughout this learning, the children developed their inquiry skills as they wondered, researched, investigated, made discoveries, and expressed their curiosity and thinking through dialogue, photographs and drawings.

The Early Learning 4 children have embraced being back in Early Learning with friends and teachers. A focus for our return to face-to-face learning has been re-establishing relationships and ensuring children feel safe and secure in their environment. Human connection is essential to wellbeing thus being onsite has helped recharge many of the children who may have lacked social interactions at home. There have been many opportunities for the Early Learning 4 children to engage in play, both indoors and outdoors. The benefits of play for children (and adults) include relieving stress, improving brain function, stimulating creativity, improving relationships and developing social skills.

We have continued to follow on the children’s interest in insects and min-beasts in our outdoor environment. The children eagerly find creatures in the Early Learning garden to show each other and the teachers. They are encouraged to observe closely and be respectful of living things by returning them to the garden afterwards. Both Early Learning 4 classes connected via a virtual excursion called  ‘What is a bug?’ with Museum Victoria. The children learnt how to identify the differences between insects and arachnids, they learnt the role bugs play in helping humans and the environment and they also learnt about what an entomologist is.

As we reach the end of the term, we have started preparing some of the children for their transition to school. We have been discussing what they might be wondering about school and what they have been doing during their transition sessions. We have focused on the exciting and positive experiences that the children will have, as well as addressing any concerns that they may have about starting Foundation. The Early Learning 4 children have shown tremendous resilience throughout this year, which will help them with the new and exciting changes next year.

The Year 4 students have made an excellent transition back to face-to-face learning. It has been wonderful to see the students reconnecting with each other. We have seamlessly transferred our Inquiry learning back on site. This week the students have been learning all about how the Earth is constantly moving and changing. Mrs Dumsday extended their learning by sharing rock samples and her own knowledge of Geology related to the rock cycle. They also learnt about the different fault lines running throughout the world and demonstrated their understanding by creating and explaining the different types of tectonic faults and boundaries using plasticine. We are all looking forward to the last few weeks together of 2021.