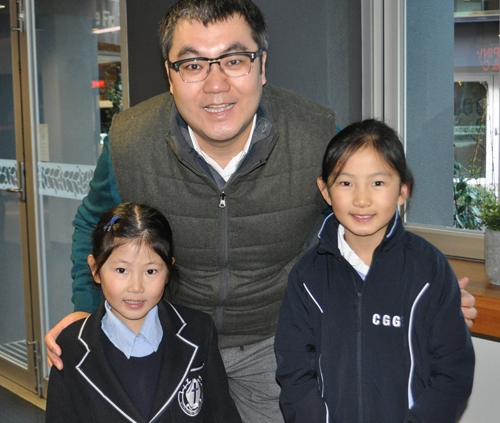 The rain and cold didn’t stop over 100 fathers and daughters rising early to celebrate Father’s Day at the annual CGGS Father’s Day Breakfast.

The morning began with a delicious breakfast of pastries, fruit, egg and bacon roles and hot chocolate or coffee, providing sustenance for the activities that followed.

The challenge for the Father/Daughter Cup began with junior school students facing their dads in a hard fought game of soccer. Resembling the Australian Matilda’s, the girls tried their hardest with deft footwork and brilliant ball skills, only to draw the game 1-1 with their dads.

The senior school dads however, managed to steal the win against their daughters in a highly skilled and very competitive basketball match. With the professionalism of Ben Simmons or Joe Ingles, some dads attempted lay ups and slam dunks, whilst the girls defended well and were more sprightly on their feet. The dads were ahead by a couple of points when the siren rang resulting in many dad’s basking in the glory of their success.

Congratulations to all who participated in the Father/Daughter Challenge Cup. Each dad was given a bag of delicious chocolates, complete with a “dad joke”, starting their day with a laugh.

There were smile on everyone’s faces and a fun morning was enjoyed by all!

The Parents and Friends Association proudly provided The Festival of Music audience complimentary pre-show refreshments, prior to the performance.

The Barbara Sutton Hall foyer was filled with grateful parents who enjoyed homemade sausage rolls, lovingly made by PFA volunteers, and a selection of red and white wine varieties.

PFA Friends of the Arts volunteers mingled with the group ensuring each guest’s hunger was satisfied and each glass was filled.

The PFA proudly support school music, dance and drama events to build relationships and a sense of community within the school.

For more information about the Parents and Friends Association please contact:

It was great to see so many girls from the Class of 2014 returning to the school to celebrate their 5 year reunion last Friday evening.  The Inspire Room in the Library was buzzing with many past and current teachers who came along to catch up on what has happened over the years, and to see what everyone is up to since leaving school. A slide show of photos running throughout the evening had everyone laughing at hair styles, funny fashion and drama productions. The highlight of the school tour was going into the ‘forbidden’ teachers staff room which was off-limits whilst they were students. Whilst many are still studying at university, some girls are starting their careers, ranging from a nurse, pharmacist and teachers. A great evening was had by all!